Bullous pemphigoid, or BP, is a severe orphan autoimmune inflammatory blistering skin disease with no approved treatments in the U.S. and Europe. This chronic disease may last several years in the absence of treatment and has a tendency to relapse. 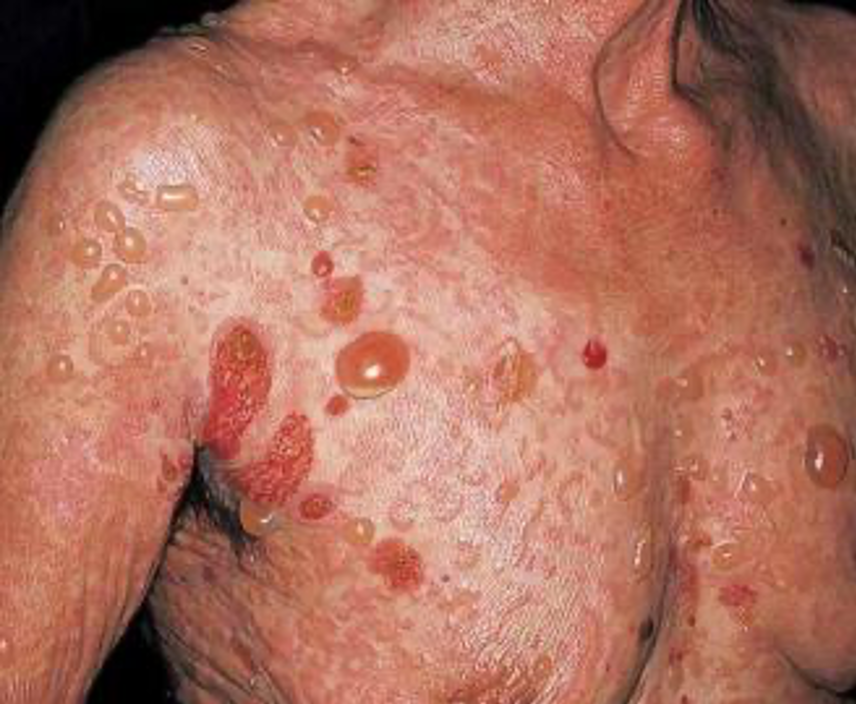 BP is most common in the elderly and is primarily treated with steroids and immunosuppressants for six months or more, which bring deleterious side effects and an approximately three-fold increase in mortality in the treated population. BP prevalence in the U.S. and Europe is estimated to be in excess of 100,000 patients.

In BP patients there is evidence that both terminal complement activation (via complement component C5) and the lipid mediator leukotriene B4 (LTB4) have a central role in driving the disease.

The fully recruited Phase II trial of nomacopan for treatment of mild-to-moderate BP was a six-week open-label single-arm study evaluating safety and efficacy in nine patients (seven with moderate severity, and two mild). Patients entering the trial were permitted to use a low dose of mometasone topically to lesions, at their option, until Day 21 as this was the first study of nomacopan in BP patients.

The trial achieved its main efficacy endpoints of clinically significant improvements in the Bullous Pemphigoid Disease Area Index (BPDAI), which is an objective measure of the area of skin affected by inflammatory skin lesions (blisters, erythema and urticaria). Seven out of the nine patients showed a decrease by four or more points (deemed a minimal clinically important difference) in the BPDAI activity score between baseline (Day 1) and Day 42, while two patients, both with relapsing disease on admittance to the trial, were non responders.

The FDA has agreed to a two-part pivotal trial with Part A and Part B having the same structure, duration, endpoints and target population of moderate and severe BP patients. FDA has granted Akari orphan status in BP.

In the Phase III study, patients will be randomized to receive either nomacopan plus oral corticosteroids (OCS) or placebo plus OCS. Following an initial stabilization phase, the steroids will be tapered according to disease response to a minimal level of OCS (< 0.1mg/kg/d prednisone or equivalent) which is considered safe. If disease response is rapid, as was seen in the nomacopan Phase II study in patients with BP, OCS could be tapered to the minimal level within six weeks. The goal of conventional OCS tapering is to achieve minimal therapy (prednisone <0.1mg/kg/day) within four to six months after initiation of treatment. Patients will only have their OCS tapered if their disease continues to respond to treatment as the OCS dose is decreased.

Once patients are on minimal OCS plus either nomacopan or placebo, the primary endpoint will be achieved by those patients with complete disease remission for eight weeks or longer. The duration of the study is six months, after which patients may be eligible to enter a separate one-year long-term safety study to provide at least six months of additional safety data.

Part A of the study is the same design as Part B, but smaller and with the objective of comparing the target dose (comparable to dosing used in the preceding paroxysmal nocturnal hemoglobinuria (PNH) Phase III program) with a lower dose of nomacopan and with placebo.

Following Part A and a planned discussion with the FDA, Part B will be conducted at the same trial sites using the optimal dose from Part A.